I.C.H. - TAGNUTS, Steamboat Tavern, Ipswich, UK - 16th July 2010
Third time lucky for me!! Since hearing, and being blown away by, the debut I.C.H. album, I’ve been in Ipswich twice previously when the band has played. The first time, in August last year, was the night after my Mum’s place got burgled; needless to say I couldn‘t leave the poor old dear alone in an unlocked house (the scum stole the house keys too) while I went boozing and schmoozing. The second was around about March this year. I’d left what was gearing up to be a rather good New Zealand Summer but weeks previous and, arriving in the UK during the second flurry of snow, I was struggling just too damn much with the cold. My knuckles had cracked open and the prospect of waiting for a bus, then the walk to the Steamboat was just too much. Man - the Kiwi climate has certainly made me soft! Haha!!!
Thankfully, this show appeared on the Steamboat’s calendar. Even a day of being frustrated, annoyed and ultimately insulted by the fuck-wit ’company policies’ of the Abbey National (or Santander as they are now) could not deter me this time - although I did forget my camera - so ‘boat bound I headed!
A disappointingly small crowd greeted Cambridge Ska-Punk act, THE TAGNUTS. The first thing that was really noticeable was a stunningly thin guitar sound which seemed to hamper the thrust of the thrashier numbers. Comparisons are unavoidably drawn with CAPDOWN but minus the brass and plus an additional guitar, giving the band an UNSEEN-esque bite. Lyrically, the songs were rife with socio-political comment and, although all the songs were new to me, a number stood out with ‘Motivate Me’ in particular lodging itself in my memory.
Come I.C.H. time, the Guinness had started to work its magic and a few more punters had turned up. After a bit of the renowned cheeky Essex banter from Ed, the band kicked in with a blur of flying dreads and a set that was faster, tighter and much more aurally assaulting than I had imagined. Much of the aforementioned debut album was played, but highlights would include ‘Not Indestructable’, a belligerent ‘Cunts’, ‘Oi Tune’, a sneering, bitter set-stealing ‘Big Yellow Taxi’ and the excellent tale of passive suburban rebellion/ apathy that is ‘Smells Like Community Spirit’. What I.C.H. has that sets the band apart from other contemporaries is a natural charm that eminates from each and every band member, but vocalist Ed in particular is a forthright and commanding figure centre stage, with just the right amount of arrogance that the vocalist of any Punk band requires.
Next time this band of be-dreaded, cantankerous ragamuffins assault a stage near you, it comes with a good recommendation from me.
I.C.H Scanner interview - hit here.
Posted by Scanner Zine at 9:12 AM No comments: 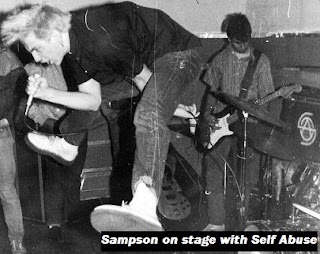 In the early hours of Sunday 25th July 2010, Todd Sampson, the original vocalist of M.I.A., passed away after virtually collapsing during an M.I.A. performance at the Black Door in his hometown of Las Vegas. He was aged 46. At the time of writing, the cause of death is unknown.
Sampson had always been a prominent figure in the Las Vegas Punk scene. In 1980, aged 16 and still a student at Clark High, he joined local band THE SWELL that, following a New Year’s Eve performance, changed its name to M.I.A. Unfortunately for Sampson, the newly-christened M.I.A. soon left town for the vibrant scene then blossoming in California. Sampson, who was still 16 when the move occurred was prevented from going with the band by his parents.
A year later, Sampson was back on the local scene with the band SELF ABUSE where he teamed up with schoolmate and ex-SPLIFFZ bassist Matt Dudenake, who took up the role of guitarist. The band played a mix of classic USHC covers and originals including the 45-second thrash ‘Locked Up For 90 Days’. The band played on and off, reforming for shows in 2001 and 2009.
In 1984, Sampson formed SAMSONS ARMY which battled through to the early 90s and, as above, reformed for occasional shows in the 2000s.
In 2008, M.I.A. vocalist, Mike Conley passed away. (Obituary here). Sampson rejoined the band which continued playing through to Sampson’s eventual collapse.
“He just started going down during the show,” said musician and close friend Rob Ruckus. “Backstage afterwards, he was totally burning up, kinda going out of it. We tried putting ice on his head, cooling him down with water ... we loaded him into the truck and got his breathing slowed down; he actually walked into his house on his own. But he started heating up again, and then he started hyperventilating, so we raced him to the hospital as fast as we could, but he stopped breathing on the way. When we got to the hospital there was no heartbeat.”
Sampson is survived by his son, Daz, and his girlfriend.
Posted by Scanner Zine at 6:56 AM No comments: