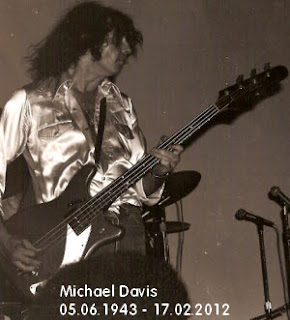 On Friday 17 February, Michael Davis, bassist with legendary proto-punks, MC5, passed away due to liver failure at the age of 68. His wife, Angela, confirmed that after a month of hospitalizaton for liver disease at Enloe Medical Center in Chico, CA, Davis passed at on Friday afternoon.
Born on 5 June 1943, Davis studied fine arts at Wayne State University in Michigan but dropped out of the course in 1964. It was then that he came to prominence as the bassist (replacing original member, Pat Burrows) in the infamous Detroit band, MC5. With revolutionary politics, combustible unhinged musical chops and a decidedly anti-establishment polemics, the band is often cited as one of the forerunners of Punk Rock with their debut album, 1969’s seminal ‘Kick Out The Jams’ causing as much controversy in its time as any Punk album has done since 1977.
Succeeding albums, ‘Back In the USA’ and ‘High Time’ continued to set a template for Punk bands of the future and continue to cast their shadow over every Punk Rocking, Garage shaking band of today.
By 1972, Davis had a Heroin habit and was kicked out of the band. This drug habit lead him to a prison term - one that saw him reunite behind bars in Kentucky with MC5 guitarist, Wayne Kramer who was also incarcerated on drug charges.
Upon his release he joined DESTROY ALL MONSTERS (that also featured fellow Detroit Punk icon, ex-STOOGE Ron Asheton) for a term of seven years and played with BLOOD ORANGE and RICH HOPKINS AND THE LUMINARIOS.
Even though MC5’s vocalist Rob Tyner and guitarist Fred ‘Sonic’ Smith had already passed away, Davis - along with original MC5 band mates Wayne Kramer and Dennis Thompson - resurrected the band in 2003 under the moniker of DKT-MC5 that toured extensively.
In 2006, Davis had a major scare when, due to a motorcycle accident, he injured his back on a Southern California freeway. He later co-founded the non-profit Music Is Revolution Foundation, dedicated to supporting music education programs in public schools. Around this time, he also joined Garage rockers LORD OF ALTAMONT.
During his latter years, Davis became a record producer and returned to his love of art. Recently, he had studied in both Oregon and California with the ultimate intention of completing a Bachelor’s Degree in Fine Arts.
As a musician to the end, Davis had been planning a recording session in Belgium with Sonny Vincent (best known for his roll as frontman for early NYC Punks, THE TESTORS) just a week after he passed away.
Davis is survived by his wife, their three sons, and a daughter from a previous marriage. At the time of writing, memorial plans are pending.
Posted by Scanner Zine at 8:30 PM No comments: