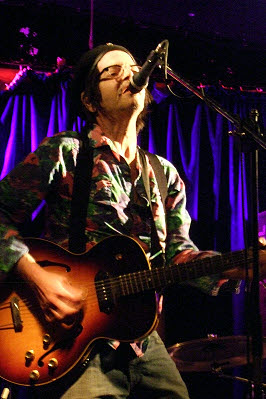 On Wednesday 13 September 2017, Grant Hart - founder, drummer and vocalist for HUSKER DU, guitarist and vocalist for NOVA MOB and a renowned solo artist - passed away at University of Minnesota Medical Centre. The cause of death was terminal Liver cancer that he had been diagnosed with in recent months; he was also afflicted with Hepatitis C. He was 56.
Born on 18 March 1960 in St Paul, Minnesota, Grantzberg Vernon Hart was the youngest of his family, born to a mother who worked at a credit union and a teacher father, and attended South St. Paul High School. Aged ten, he inherited his brother’s (who was just two years older) drum set and records after he was killed by a drunk driver. During his high school years, Hart was in a cover band named TRAIN, playing keyboards.
On leaving school, he landed jobs at various record stores, including Cheapo Records where he worked with Greg Norton. It was at this shop that he met New Yorker, Bob Mould. The three went onto form HUSKER DU.
The history of this great and influential band (arguably, the most influential US band after the RAMONES) has been widely documented, from the blur of ‘Land Speed Record’, through to the groundbreaking ‘Zen Arcade’ double album and onto a major label deal with Warner Bros and the ‘Warehouse: Songs And Stories’ double album swansong. There’s been the book, Husker Du: The Story Of The Noise-Pop Pioneers Who Launched Modern Rock, the chapter in Michael Azerrad’s book Our Band Could Be Your Life and the extensive Husker Du Database - to name but three - so I won’t detail too much of this iconic band’s history.
However, it should be noted that besides writing and singing songs, he was also responsible for most of the band’s artwork. He also designed a number of other sleeves, notably fellow Minneapolisians, THE REPLACEMENTS and their album, ‘Hootenanny’.
During the band’s tenure, Hart developed a Heroin habit and was also incorrectly diagnosed as being HIV-positive in 1986, just as the band’s major label debut, ‘Candy Apple Grey’ was released. It is said that it was Hart’s drug addiction that lead to to the 1988 break-up of the band. That was no doubt partially true, but the feuding between Mould and Hart about who should retain most creative control was another major factor. Then the band’s manager, David Savoy, committed suicide. If that wasn’t enough, the fact that during the end of HUSKER DU, Hart had already got together a project named SWALLOWS no doubt indicated Hart’s dissatisfaction and rankled Mould's ire further.
Following HUSKER DU’s demise, Hart released the ‘2541’ EP in October 1988 - a mere six months following the split. This was followed early in 1989 with the ‘Intolerance’ album. Later the same year, he formed NOVA MOB, taking on guitar duties along with vocals. It was an often misunderstood band and its fortune was not aided when Rough Trade, the label that released the band’s 1991 debut album, the excellent ‘The Last Days Of Pompeii’, declared itself bankrupt on the very day the album was released.
A second NOVA MOB album was released in 1994 before the band split following a European tour. From then on, Hart continued to play intimate, career-spanning sets and releasing impressive solo albums, culminating in 2013 with the epic ‘The Argument’, a double album based on John Milton’s Paradise Lost and William S Burrough’s adaptation of the same book as Lost Paradise. In that same year, the feature length documentary ‘Every Everything: The Music, Life And Times Of Grant Hart’ was released.
At the time of his passing, Hart was working on another concept album about Ted Kaczynski, the Unabomber, titled ‘Pop Manifestos’.
Hart is survived by his wife Brigid McGough Hart, his adult son Karl, granddaughter Grace and siblings Nett, Roxanne and Craig.
Putting into words the importance of Hart and his music is no easy task. I was fortunate to see HUSKER DU at the very end of their career - at the 1987 Glastonbury Festival no less. Sure, it wasn’t the ideal venue or the most intense period of the band’s existence but I felt, and still feel, very fortunate to have seen the band before they imploded.
It is without a doubt that of all the bands that were spawned by the US Hardcore boom, it was HUSKER DU that pushed the boundaries the most, be it the warp-speed of ‘Land Speed Record’, the influence of psychedelia as typified in what must be one of the best cover versions ever in the band’s take of THE BYRDS’ ‘Eight Miles High’, an unerring Pop sensibility often channelled through Hart’s uplifting vocal, through to the ultimate taboo of signing to a major label.
Hart himself challenged the pack too - long-haired, usually barefoot, openly bisexual and in possession of a voice that could soar to the heavens. I had my own personal nickname for him: Mr. Golden Tonsils.
I was fortunate to see him live here in New Zealand in 2016 - and he was stunning. Classic song followed classic song and yes, those tonsils were still golden! I managed to have a conversation with him also - something I am profoundly grateful I did now. We spoke of that Glastonbury performance and the turd who threw a bottle - which exploded as it hit his vocal microphone. We spoke of NOVA MOB too, a band I also saw at the London Marquee in 1991. And, rather embarrassingly, I mentioned his 'golden tonsils'!
Hart’s passing is tragic on so many levels. Not only was he so young, but he was still stunningly creative. ‘The Argument’ could be his finest work in fact, laden with stunning songs and invention. I desperately hope the album he had near-completion when he passed will be released.
Go well Grant and always Shine, Shine, Shine....