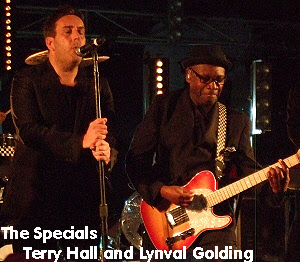 THE SPECIALS - NEWMATICS - Shed 10, Queens Wharf, Auckland, New Zealand - 10th April 2012
I thought I’d missed the boat; the boat being THE SPECIALS live experience. Among the very first records I bought back in 1980 at the tender age of 11, was the ‘Too Much Too Young’ EP, which remains a firm favourite of mine to this day. Obviously, I was too much too young to see the band then.
Move forward to 2009, I’m living in New Zealand and the band announces some reformation dates in the UK, but minus the band’s main creative force, Jerry Dammers. "Sad old tossers," I thought. "Milking the legend and boosting the bank balance." Snag is, many friends of mine saw the band on this tour and said they were smoking. "Well, it ain’t THE SPECIALS without Dammers," was my rather half-hearted conciliation.
But then a New Zealand show is announced! "OK, I’m going..." I thought. Second snag - it’s the very same night I was flying back to the UK to see my none-too-well Mum. Oh well, "It ain’t THE SPECIALS without Dammers...." 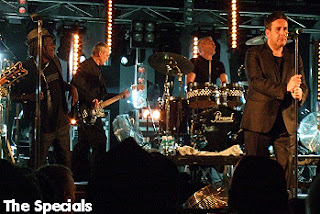 Soon after I saw the live DVD of the reunion tour and it was obvious: the gig was indeed out of this world - Dammers or not! More than a tad gutted, I resigned myself to never hearing ‘Too Much Too Young’ live by the band that recorded it.
Come 2012 and there is another NZ show announced and this time, no matter what (including a new job which didn’t really entitle me to any time off so soon after starting it), I was going. Chuffed. Prior to this Auckland show, the band had just done about five Australian gigs. The final night of a tour is always risky; while there is the possibility of watching THE show of the tour, there is also the greater possibility of a tired and jaded band, or one too intent on end-of-tour celebrations to give a shit about the music.
So, on a humid and surprising hot early April evening, I walked to the Auckland waterfront and entered what was basically a huge tin shed with a concrete floor - a venue that calls itself Shed 10. I had visions of the sound bouncing off all of these hard surfaces making just one big Rude Boy mash-up of noise. Thankfully, due to a rather low ceiling and heaps of wooden beams, somehow the reflections were absorbed, making the sound quality among the best I’ve heard.
So, with an over-priced beer in my hand, I awaited my debut experience of New Zealand’s own vintage Ska crew, NEWMATICS. The band played a more Funk-orientated take on Ska and while they were far from dull, they never really excited me as much as I had hoped. It was all rather polished and while vintage tunes like ‘Five Miseries’ and ‘Playing the Champion’ entertained, a lot of the remainder was filler. My fave song, ‘Walkie Talkies’, never made the show, but the closing ‘Riot Squad’ was certainly the band’s finest moment. After a mere 30 minute set, the band had gone. 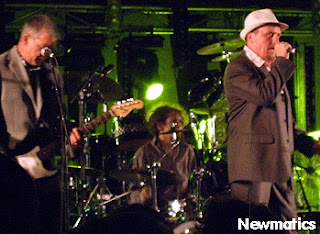 And so THE SPECIALS. I’d read the band promised a different show from the 2009 tour (as seen on the aforementioned DVD) and it was instantly apparent with an almost acapella introduction to opener ‘Do The Dog’. Once the band kicked in, a non-stop celebration started up as the diverse crowd (and I mean young and old Punks, a few hippies, some old Skinheads, a good number of suited-and-booted Rude Boys and plenty of Joe Normals) skanked, grooved and sang along to every song. 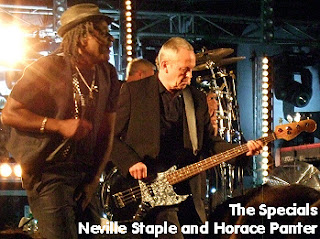 Highlights were plenty: a stunningly pointed and graphic ‘Doesn’t Make It Alright’, the sublime quality of ‘Do Nothing’, a mega-up tempo ‘Monkey Man’, ‘Hey Little Rich Girl’ that got dedicated to the recently deceased Amy Winehouse, ‘A Message To You Rudy’ that received the biggest cheer of the night and the mass singalong set closer ‘Enjoy Yourself’.
The band clearly appeared to be having a good time. Lynval in particular seemed to be the heart of the band, constantly smiling and dancing, climbing the PA columns and being chatty with the crowd while Neville Staples was pretty much the voice of the band imploring the crowd to dance harder and sing louder. The famed sardonic wit of Terry Hall was in evidence too, suggesting that he was ‘bored’ and wanted a ‘nice cup of tea’ while also saying the venue needed ‘a good dust’. With Roddy Radiation pulling his rock ‘n’ roll poses at the front, it’s often easy to forget the duo that make THE SPECIALS such a formidable live at - Horace Panter and John Bradbury form an incredibly tight and effective rhythm section that allows the rest of the band a great deal of freedom. And as for Jerry Dammers replacement? Well... Jerry who??? 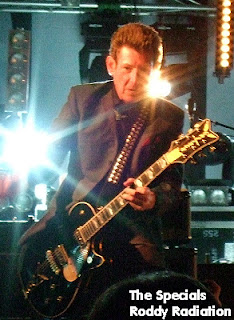 As for surprises, well, there was no ‘Ghost Town’ nor ‘Guns Of Navarone’ this time around. In their place came ‘International Jet Set’, and ‘Too Hot’ (the entire first album was played in fact). I’d hoped ‘Why’ may make an appearance but no. The fact the venue had a low ceiling also created a bit of a surprise as there was no room for any over-head lighting. The massive SPECIALS backdrop was there again, but with stage and floor level lighting in front of it creating a more intimate yet slightly threatening and oppressive feel.
Close on to two hours after hitting the stage, the encores of ‘Little Bitch’ and ‘You’re Wondering Now’ signalled showtime was over and all that remained in Shed 10 was a lot of smiling, sweaty people all proclaiming that it had been a great night.
And yes, I did finally get to hear ‘Too Much Too Young’ live and it lived up to each and every expectation I had.
More photos here.
Posted by Scanner Zine at 9:00 PM No comments: