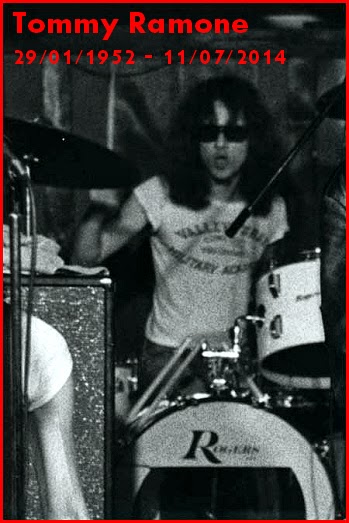 On Friday 11 July 2014, Thomas Erdelyi - better known as Tommy Ramone, drummer and founder member of THE RAMONES - passed away. It is said that he passed away at his home in the Ridgewood area of Queens, New York City while under the care of Hospice following unsuccessful treatment for bile duct cancer. He was 62 years of age and the last remaining original member of the band left alive.
Erdelyi, whose birth name was Erelyi Tamas, was born on 29 January 1952 in Budapest, Hungary, born of Jewish parents who had survived the Holocaust. At the age of four the family emigrated to the USA, allowing Erdelyi to grow up in Forest Hills in the New York City suburb of Queens. It was here, in the mid-60s, that he played in a band called Tangerine Puppets with one John Cummings. Years later, Cummings would morph into Johnny Ramone and the RAMONES would become a reality.
The story of how the RAMONES formed is all over the internet, in books and, if you are reading this, you probably know it already. Needless to say, Erdelyi played drums on the first three studio albums (‘Ramones’, ‘Leave Home’ and ‘Rocket To Russia’) as well as what remains today the definitive live album, ‘It’s Alive’, recorded and the Rainbow in London on 31 December 1977. He continued to manage the band after leaving and co-produced the fourth album, ‘Road To Ruin’. In 1984, for the band’s eighth album, ‘Too Tough To Die’, he returned to the producer’s chair cutting what was to be the last truly classic RAMONES album.
His role as a producer was highly sought after, with him producing such notable records as REDD KROSS’ ‘Neurotica’ and the REPLACEMENTS classic ‘Tim’.
Musically, along with former SIMPLISTICS member and his long-time companion, Claudia Tienan, Erdelyi played in the blue-grass folk duo Uncle Monk, releasing a self-titled album on their own label, Airday.
Ms. Tienan survives him, as does a brother, Peter.
The importance of THE RAMONES, not just to Punk Rock but to all music since, cannot be understated. The band stripped away the bloated musical excess of bands like Yes and Emerson Lake And Palmer and played it harder and faster than any band that went before. The songs were accessible but simultaneously severe and alarming and have since become the template for so much that has followed. I never saw THE RAMONES with Tommy, but I did hear ‘It’s Alive’ at the tender age of 12 and my jaw dropped to the floor. As crass as it sounds, life had changed in the space of side one of that album. School? Education? Sport? Pah! They all became secondary and music became my passion - probably my only passion to this day - and it was through that album that I, like so many others, learnt how to play guitar.
Genuine life-changing incidents only occur once or twice in a life-time. I feel fortunate to have experienced a personal and cultural revolution through the power of THE RAMONES and all that it has lead to. What’s more, as I reach mid-40s and look back, I can say without a single sense of regret that the life-changing, life-affirming and life-enhancing experience of hearing ‘It’s Alive’ at the age of 12 was, and still is, without compare.
And the glue that kept it all together was Tommy’s beats, sense of sound production and sensibility in a band of misfits; a band all of whom have now, sadly, passed away.

Posted by Scanner Zine at 8:17 PM No comments: