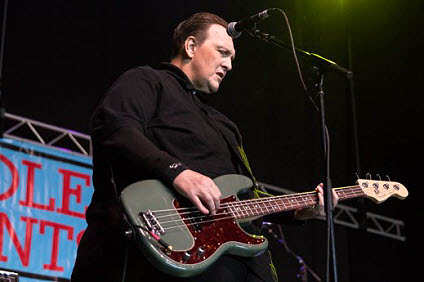 On Wednesday 27 June 2018, Steve Soto, founder and bassist for both AGENT ORANGE and ADOLESCENTS passed away in his sleep; the coroner’s office has stated that this was due to natural causes. He was aged 54.
Soto was born on 23 August 1963, the son of Mexican parents. His first foray into music was in 1979 with the formation of legendary Surf-Punk band, AGENT ORANGE. His tenure in the band was shortlived, as the following year he formed the band with which he would be most associated: ADOLESCENTS.
Releasing the self-titled debut album in 1981, it would go onto be considered a classic of the genre and was among the very first Hardcore records to be distributed throughout the USA. Soto went onto become the only constant member of the band.
Besides ADOLESCENTS, he was also a member of LEGAL WEAPON (1981-’82), JOYRIDE (1989-’94), MANIC HISPANIC (1992-2017), the supergroup 22 JACKS, his own solo project which he fronted - STEVE SOTO AND THE TWISTED HEARTS and BLACK DIAMOND RIDERS.
Other musical projects included being a member of PUNK ROCK KARAOKE with members of NOFX and BAD RELIGION, an 80s cover band FLOCK OF GOO GOO, and being part of CJ RAMONE’s touring band. It is with CJ that I caught him live in New Zealand back in 2015.
Besides being infamous in the history of Southern California Punk Rock as a musician - and gaining the reputation as ‘the nicest guy in Punk’ - he also spent time in the 90s booking bands at the well-known Anaheim venue, Linda’s Doll Hut. His bookings would include the famous (OFFSPRING, BAD RELIGION), through to the unknown.
Although suffering with weight and health problems, he quit drinking at the age of 31 and is quoted in interview as saying, "Sobriety is good, I get more accomplished."
Just prior to Soto’s passing, on 24 June, he played with ADOLESCENTS in Boston, MA. This would be his last live performance before he travelled back home. On 26 June, he got together with JOYRIDE friend, Greg Antista and producer Jim Monroe where talk was positive about life and future musical endeavors - including the imminent ADOLESCENTS album, ‘Cropduster’. Antista dropped Soto off at his parent’s house in Placenita, CA where he fell asleep for the final time.
A memorial service was held on Saturday 7 July at Richfield Community Church, Yorba Linda, California - the church he attended weekly with his girlfriend, Stephanie Hough. Antista coordinated the service with Soto’s immediate family.
A much louder celebration of his life was held the following evening at Alex’s Bar, Long Beach, where numerous friends performed Soto songs acoustically and culminated with a performance by CJ RAMONE.
Although having been married twice, Soto had no children. He is survived by his parents and immediate family.

Posted by Scanner Zine at 7:31 PM No comments: