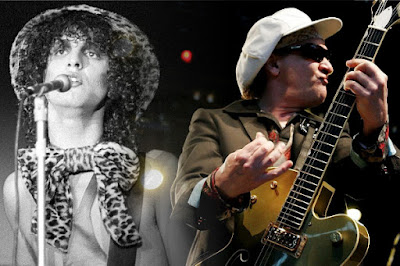 On Wednesday 13 January 2021, Sylvain Mizrahi, better known as Sylvain Sylvain, co-founder and guitarist of NEW YORK DOLLS, passed away at his Nashville home. The cause of death was cancer. He was aged 69.
Sylvain was born on 14 February 1951 in Cairo, Egypt. His mother, Marcelle, was of Syrian descent while his father, David, a banker, was originally from Turkey.
The Suez Canal crisis of 1956, precipitated when Egypt’s president, Gamal Abdel Nasser, nationalized the canal, led to the family’s emigration, initially to France before heading to New York in 1961 - originally Buffalo before moving on the New York City borough of Queens.
Prior to joining the NEW YORK DOLLS, he had a band with school buddy and future Doll, Billy Murcia, called THE POX before ACTRESS which featured future DOLLS Arthur Kane and another school friend, the infamous Johnny Thunders. He also ran a clothing company with Murcia, Truth and Soul, in the mid-60s.
It was the formation of and his participation in the NEW YORK DOLLS that Sylvain will be most remembered. The band made two classic albums in 1973’s self-titled debut and the successor, ‘Too Much Too Soon’, the following year. - both of which had very limited success on release.
Much has been written about the NEW YORK DOLLS. There’s a great book written by Nina Antonia entitled Too Much Too Soon and a documentary, ‘All Dolled Up’, both of which tell the story far better than I can. However, the brash, gender-bending, unapologetic influence of the band should not be understated, least of all its influence on the early Punk Scene. Sylvain is quoted as saying to Brooklyn Vegan in 2006, “The reason why the Dolls got together was because of the boredom with the norm of the day, which was like the stadium-rock era. The 20-minute drum solos, songs that were a big operetta. They were sort of boring, they'd lost their sex appeal."
When the Dolls split in 1977, Sylvain was the only original member left in the band along with vocalist David Johansen, for whom he went onto play on a number of solo albums. The demise of the band was hindered by one Malcolm McLaren, who had the Dolls playing in front of a hammer and sickle flag and Johansen clutching Chairman Mao’s Little Red Book. McLaren then tried to lure Sylvain to the UK for a band he was assembling. The band was SEX PISTOLS; Sylvain’s role never fulfilled.
He started his own band, THE CRIMINALS, and then landed a solo recording deal with RCA which resulted in the 1979 self-titled album.
Various one-off projects appeared - SYL SYLVAIN AND THE TEARDROPS in 1981, ROMAN SANDALS in 1984 and a CRIMINAL$ release in 1985.
In the early 90s, he moved to the sunnier climes of Los Angeles and released another solo album, ‘Sleep Baby Doll’, in 1998. Around the same time he got involved with LA Punks, THE STREETWALKIN’ CHEETAHS for some live work.
2004 saw big news in the reformation of The Dolls releasing another three albums between 2006 and 2011. During this time, he also hooked up with ex-DEAD BOYS guitarist, Cheetah Chrome, for the band BATUSIS which released an EP on Smog Veil in 2010.
2013 saw him hook up with former SEX PISTOLS bassist Glen Matlock on the Sex Doll Tour before emerging with a new band in 2015, SYLVAIN SYLVAIN AND THE SYLVAINS.
2018 saw the publication of his autobiography, There’s No Bones In Ice Cream on Omnibus Press.
He lived in Atlanta for several years before moving to Nashville in 2015. On 27 April 2019, he announced he had cancer.
He is survived by his wife, Wanda O’Kelley Mizrahi, his son Odell and his sister, Brigitte.

I never saw Sylvain live, but via the NEW YORK DOLLS, I have been listening to him for a clear 30 years. Sure, Mr Thunders and My Johansen may have got all the attention, hogging the spotlight as their egos demanded, but it was the solid, rhythm guitar of Sylvain that seemed to hold the band together - a band that could, and did, so easily devolve into chaos. If you haven’t heard his 1979 solo album, it’s worth trying to track down being a neat mix of Rock ‘n’ Roll and Power-Pop cool.
Another legend, and one that can firmly be described as such, has left us. RIP Syl and condolences to all those that knew you who have been left behind.

Posted by Scanner Zine at 8:00 PM No comments:

2020 huh? Pretty much a generation-defining, epochal year - and not for musical reasons.  COVID-19 has ravaged the musical spectrum, be it the live arena especially (and I don’t mean an ‘arena’ but the live, gig-playing band in general) or that of recordings. Oddly, it has also provided the opportunity for bands to record music in a new way, new bands springing up in an isolated digital world, and the ‘streaming’ of live performances on the likes of Facebook.  I’ve caught a few (too many) of those and saw lots that would have previously been a ‘new’ idea rejected within a band practice - even before any booze or substance-of-choice kicked in. I really think life as we knew it has changed; it might only be on the short-term (of years), but it’s changed.
And you know what??  If you think COVID is a scam... a media-generated deployment to sell copy... a myth? Well - please - fuck off.  I know people who have contracted it, have died from it.  You disbelieve??  Leave ya message below so we know who you are - but please - move to north Greenland.
Musically, it’s been a surprisingly great year.  THE DAMNED released a record that’s on par with ‘Black Album’ era stuff. I really hope that this line-up doesn’t lose momentum with the original line-up getting back together for some (money-grabbing) reformation gigs.  My most-played, indispensable album isn’t actually in the list below as it’s ‘not quite’ Scanner material.  BOB DYLAN’s ‘Rough And Rowdy Ways’ is the man’s most interesting and intriguing album since ‘Oh Mercy’ and maybe even ‘Slow Train Coming’.  That might mean nothing to most readers, but it means a lot to me. Anyway, let’s get on with the Punk Rock!!
Looking at the ‘Other Contenders’, especially the albums, shows a real depth of quality - and that’s considering the fact that I have not heard BOB MOULD’s ‘Blue Hearts’, X’s ‘Alphabetland’ (I have done the unthinkable and streamed it), either of the ARCHERS OF LOAF singles Merge has released, any of the recent Dirt Cult albums or the PARANOID VISIONS reissues and latest 10” set.  Gutted really as they seem to have got ‘lost’ in the mail - and that’s no disrespect to PV - easily one of the best and most genuine bands I’ve dealt with for many years.
Anyway - waffle over.  Yes, I know I’ve missed YOUR favourite record - I probably haven’t even mentioned it. Boo-Hoo... Tell me what I’ve missed.  Here’s what go me rockin’ ‘n’ rollin’, movin’ ‘n’ groovin’, shakin’ ‘n’ quakin’, thinkin’ ‘n’ talkin’, inspired and generally thankful to a whole bunch of bands that just fucking NAIL IT.