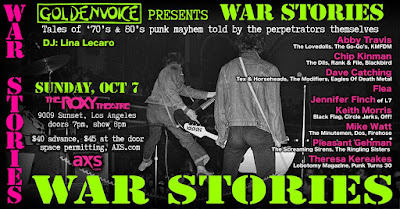 BEYOND AND BACK: WAR STORIES AT THE ROXY
Roxy Theatre, Los Angeles, USA - 7th October 2018
By Matt Powell - Photos by Dianne Carter
This is no place
To be addicted
To another pace 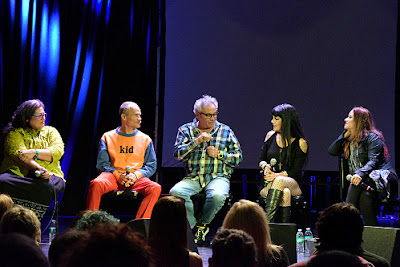 Only the occasional green-haired weirdo or leather dominatrix crawls along the Sunset Strip and into the Roxy Theatre this night, their scant numbers a faint reminder of a time when the streets of Hollywood were flooded with freaks peacocking their membership in a special, sacred order.
A glorious sunset sprawls across the October sky, orange and pink and baby blue, so clean and bright. Like the emerging poshness of the new Sunset Strip itself, it is almost too pretty for tonight.
Such is the modern world.
And in some ways the modern world hovered over the event held within the Roxy’s black walls Sunday evening. War Stories is just as described: "Tales of ‘70s and ‘80s punk mayhem told by the perpetrators themselves." Seated across the Roxy stage where so much sweat and blood and beer was spilled, eight seminal musicians and documentarians sat on folding chairs (the audience did as well — folding chairs in the Roxy!) and shared tales of the vibrancy and debauchery of Los Angeles’ brief but bright punk days.
This was the second War Stories evening, following a February appearance at El Cid featuring a slightly different lineup. The ringleaders are Pleasant Gehman and Theresa Kereakes, who co-founded the punk fanzine Lobotomy in 1978 combining Kereakes’ photography, Gehman’s high school typing class skills, and a shared limitless lust for punk life.
Sunday’s Roxy show featured Gehman, Kereakes, Abby Travis (THE GO-GO'S, THE LOVEDOLLS, KFMDM) Chip Kinman (THE DILS, RANK AND FILE), Dave Catching (THE MODIFIERS, TEX & THE HORSEHEADS, EAGLES OF DEATH METAL), Jennifer Finch (L7), Mike Watt (MINUTEMEN), and Flea.
It was an event steeped in nostalgia and remembrance of a movement born from a rejection of traditional norms. Yet there was a pervading reminder that this could simply never happen again.
As with all scenes (musical, artistic or otherwise) you had to be there. War Stories was designed to celebrate a vibrant and now-dead scene that took place in a particular window of time in a particular place among a nebulous but ultimately limited group of participants.
In a tradition as old as recorded history, one purpose of such remembrances is the passing on of what once was for those who weren’t there, in the hopes that some part of the way the people on this stage and their cohorts lived their lives and made their art can seep a little into the consciousness of younger generations.
The crowd, mostly, seemed to have been there, peppered with a few of the young and hip and curious: those who can never know the feeling of sneaking into a club with a bad ID, or no ID (barcode technology makes that impossible now. Travis observed how the crackdown on underage club-going in Los Angeles really began in earnest with the arrival of the 1984 Olympics, a seminal moment that split Los Angeles into the clearly defined pre and post), or of wandering rows of cars in Hollywood parking lots looking for an unlocked Cadillac in which to fornicate, fog the windows for a few minutes, and be gone before the owner, none the wiser, returned (everything is locked today and cameras capture all). There were stories of crash pads like Gehman’s infamous Disgraceland left unlocked for days or weeks on end, or landlords removing apartment doors altogether in a futile attempt to get Flea and his deadbeat degenerate cohorts to vacate.
Before technology and ubiquitous surveillance, one could get away with all manner of crazy shit.
Kereakes, who self-identified as "punk rock’s designated driver," pulled these seemingly hedonistic remembrances together into a poignant observation: her and her merry band were virtually, if not literally, unemployable. While many see punk as a movement of destruction, in Los Angeles’ first wave at least, it was an artistic movement of creation and, perhaps unintentionally to some, of entrepreneurship.
"We had to rely on word-of-mouth, calling people on the phone, talking to them at social gatherings and making the commitment to be somewhere at a given time and place," says Kereakes. "Once you left the house, you expected someone to show up. Your only recourse was to find a payphone. We were analog and happily so. We were entrepreneurs and didn't realize it. We invented a new way of doing business." 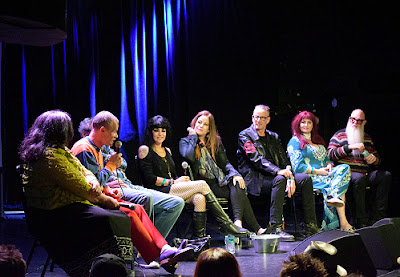 Who were these punks? Some were freaks and wannabes and hangers on, for sure. There were drunks and junkies and dropouts and dealers. There were musicians foremost. And there were scribes and photographers, or fans and scenesters who were addicted to the energy and had access to a Xerox machine. It didn’t matter; collectively they built an infrastructure faced with the dual rejection of and rejection by mainstream society. They built their own magazines, record labels, bands, and even venues (Many punk clubs began as Chinese restaurants. Chip Kinman recalled an early DILS gig at a pizza parlor in Garden Grove). "If you’re in a band you’re an entrepreneur whether you like it or not," Kereakes observed.
It was a time of total freedom and lack of judgement, of unfettered creativity born from the cultural desert of 1970s Los Angeles. Bands as seemingly disparate as THE GERMS, THE BLASTERS and BLACK FLAG shared bills and, eventually, fans. There was diversity of style, of presentation, and of influence. "I think that without being the ‘politically correct police’ we were a much more accepting group," says Kereakes. "We were misfits and outcasts to begin with and that was our bond. We appreciated other weirdos and their output, their lifestyle, their fashion. Although, if someone was displaying bonafide unacceptable behavior, we would most definitely call them out."
Flea, the baby of the group (along with Finch), recalled his initial disinterest in the punk scene that was flowering in Hollywood. Flea explained that, although he was a troubled kid with a drug problem, musically he was into jazz and classical at the time, and punk seemed to him like "another thing with an arbitrary set of rules." But then he saw a FEAR show while on acid, and shortly thereafter auditioned for the band when it was announced they had fired bassist Derf Scratch. Flea got the FEAR gig and his friends, including many sharing the stage this night, celebrated with an 18-day party because one of their own had actually joined a "real band."
As with Angeleno R and B, blues, jazz and, to a certain extent, country music, Los Angeles’ indigenous punk music has always been given short shrift by unapologetically ignorant eastern critics. (This phenomenon continues into the present day with regular, unintentionally hilarious articles from New York based writers failing, or even trying, to grasp Angeleno culture.) London claimed punk’s origins and New York claimed the higher artistic ground. What did a bunch of pretty kids in the land of sunshine railing against their perceived petty problems have to say?
But to dismiss Los Angeles punk is to miss the point of Los Angeles altogether, ground zero of the detective novel and film noir — a bright and guilty place where dark things happen in harsh light. Gehman has written about the two Hollywoods that existed at the time, one of the Tinsel Town Dream Factory, and the other of her Hollywood Boulevard: "a seedy carnival midway... its pink-and-black granite "Walk of Fame" was dull and littered with beer cans, used condoms, and fast-food wrappers and dotted with spit and chewing gum."
There is a kind of surrealism in the juxtaposition of these outcasts carving their way in a company town where Old Hollywood was ageing but still very much alive. Gehman recalled smoking a joint with Tony Curtis. Catching, who briefly held a legitimate vocation as a pizza delivery driver, recalled delivering pizzas to stars like Anthony Perkins.
The very unique nature of Los Angeles, and Hollywood specifically, helped shape and fuel the theatrics and debauchery and tone of the scene. "The intersection of Old Hollywood, film noir, bright sunshine and punk rock is what gave L.A. punk and new wave its distinctive personality," says Kereakes, "just as every town imprints itself on its art."
So what if L.A.’s punk scene was born from relatively harmless kids making noise from no deeper motivation than their own boredom and an urge to party until the days change at night, change in an instant. Surely there is no more noble a deed than creating something from nothing. Locked out of the stale Hollywood establishment, these latchkey kids chose to build their own empire out of nothing more than their energy, some safety pins, and rudimentary typesetting skills as a testament to the great Angeleno tradition of invention and reinvention.
Sunshine be damned.
The prevailing theme of the night, reinforced from all who spoke, was the sense of true community. The community was healthier, more vibrant and robust in a time before social media. Camping out for concert tickets was social media. The level of superficial connectivity in the 21st century has killed the ability of true local scenes to develop.
"You had to be engaged in real life, not virtual life, on an interpersonal level, face to face," says Kereakes. "Scenes could grow and develop in their own world on their own timeline, organically."
Another theme that emerged is that the participants, despite the blur of endless parties and mayhem, knew at the time that they were a part of something special. Even as it was unfolding, musicians and scenesters alike were cognizant of which bands were "first wave," (Flea mentioned the SCREAMERS, an early L.A. punk band who never made an official recording, calling them "the Buddy Bolden of punk rock," a reference to the pioneering New Orleans jazz cornetist whose music was never captured on wax) versus "second wave," (quintessential L.A. punk band, X) and the skeptical "new wave" (Mike Watt recalled an existential crisis on a pivotal night when he was forced to choose between X opening for DEVO in Long Beach or the GERMS at the Masque. He chose the GERMS). 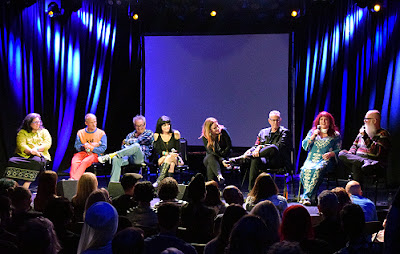 Despite the name of the event, and the accessory baggage that comes with the term "punk," the war stories this evening weren't especially deranged. Some petty crime, sure. Lots of booze and drugs and public sex. But these hi-jinx seem almost quaint from today’s vantage.
The evening was nostalgic, but it was funny, charming and in some ways inspiring. Perspective is a funny thing. Looking back at a wild burst of energy and art, of the perfect people in the perfect place at the perfect time, one is faced with both the thought that it can never be duplicated and the thought that it should never be. It is up to the artists of today to make their own way. The eight people on the Roxy stage this night proved you can build anything you want, so long as there is a will. Skills are helpful but not required. Don’t ask for permission. Don’t give anyone the opportunity to stand in your way. Just roll right through the noise and do your thing, and do it righteously.
War Stories will continue, incorporating themed nights (the all-women "L.A. Woman" panel is in the works now) and the show plans to hit the road, featuring a regular lineup augmented by local punks wherever the stories may take them. While War Stories focus on the L.A. scene, punk was a universal explosion.
"Scenes developed a personality and identity that gave all the bands strength and power once one of them broke through," says Kereakes. "It gave long-time local fans of these bands ownership and a sense of family and community pride."

Posted by Scanner Zine at 7:40 PM No comments: