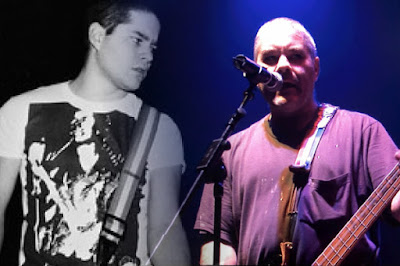 On Friday 9 October 2020, Pierre Kezdy - bassist with the bands NAKED RAYGUN, PEGBOY and STRIKE UNDER among others - passed away at a Hospice in Glenview, Illinois. He was aged 58. The cause of death was Cancer.
Born on 4 January 1962 in Chicago, Illinois, he was the younger brother of then-future EFFIGIES frontman, John Kezdy.
In 1979, he formed the band STRIKE UNDER which released the ‘Immediate Action’ 12” on Wax Trax! in 1981 before forming TRIAL BY FIRE in the same year following the departure of STRIKE UNDER’s vocalist. In 1982, that band split and Kezdy went on to join NAKED RAYGUN for the band’s second album, ‘All Rise’. It was a band he stayed loyal to for ten years - writing fan favourites ‘Vanilla Blue’ and ‘Home’ among others - before joining PEGBOY in 1994 (just in time for the ‘Earwig’ album). The band that was formed by former NAKED RAYGUN guitarist, John Haggerty.
Throughout this time, Kezdy kept his day job of plumbing.
NAKED RAYGUN started playing again in 2007 and in 2011 Kezdy fell victim to a stroke. Being forced to leave, he recovered sufficiently to rejoin the band for some live shows in 2013.
In 2007, Kezdy was also interviewed for the film You Weren’t There, a film that looked at the Chicago Punk scene.
Besides the bands mentioned, he also played in RAINBOW GIRLS (with his brother, John), THE INTECEPTORS and ARSENAL, which also featured Santiago Durango of BIG BLACK and NAKED RAYGUN fame.
In addition to his brother John (who fronted THE EFFIGIES), Kezdy is survived by his wife Heather, children Nicole, Mary, Peter and Delphine and his brother Andre.

I never got to see Kezdy live. Much as I love NAKED RAYGUN, it is PEGBOY that had the biggest impact. I interviewed the band’s guitarist John Haggerty in issue two of Scanner, back in 1998 just after the release of the band’s third album, ‘Cha Cha Damore’. Kezdy did come up in conversation when I asked about his joining the band. Haggerty replied that original bassist Steve Saylors wanted to leave the band and, having thought they had exhausted all possibilities that, “it dawned on me that Pierre wasn’t really all that busy with Naked Raygun anymore, so we called him and he said yeah!”.

Posted by Scanner Zine at 3:09 PM No comments: