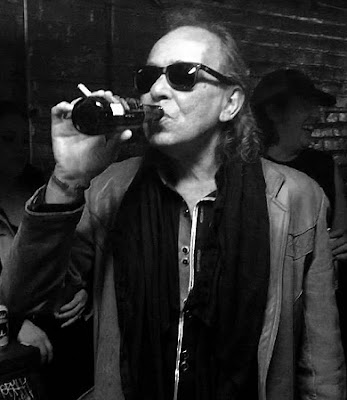 On Friday 27 October 2017, Mike Hudson, author, journalist and most notably, vocalist of THE PAGANS, passed away at his Los Angeles home, due to sepsis from a recently lacerated bowel. He was aged 61.
Hudson was born in Collinwood, Ohio before moving at an early age to Wickliffe, Ohio, about 30 minutes from Cleveland. He quit school in his sophomore year and hitched around the country, but always returned to Cleveland. Along with his brother, Brian, he acquired an extensive juvenile record, ranging from underage drinking, pot possession, carrying a weapon and assaulting a police officer.
In 1974, along with Brian on drums and himself on guitar, he formed the garage rock band, MAD STAGGERS, which mutated into VENUS IN FURS and then THE PAWNS. Come 1977, they added vocalist Robert Conn and formed the band that Hudson would become most infamous for - THE PAGANS. A single ‘Six Of Change’ was issued before Hudson took over vocal duties in 1978, with Mike Metoff joining on guitar. What followed were three classic singles - ‘Street Where Nobody Lives’, ‘Dead End America’ and ‘Not Now No Way’ before the band split up in 1979 after a failed album session.
The split didn’t last long however as in 1982, Hudson and Metoff reunited to start Terminal Records and form LES RAVING SOUNDS which morphed into a new line-up of THE PAGANS. After releasing what became known as ‘The Pink Album’, the band split-up, once again, the following year.
1986 saw another line-up, resulting in the live ‘The Godlike Power Of The Pagans Live’ in 1987. This line-up split in 1989, although numerous recordings have appeared on compilations.
The 90s became a bit of a lost decade for Hudson musically. He played briefly with GG ALLIN AND THE MURDER JUNKIES and recorded his solo album, ‘Unmedicated’, which remained unreleased until 2006. He also sang for THE HIGHROLLERS and the avant-garde band THE STYRENES.
In 1991, his brother Brian died. At this stage, Hudson, who had always been a heavy drinker, hit the bottle harder than ever. He moved to New York in a state of depression, but got a job at the Irish Echo. It was also here, in the East Village along with DEAD BOYS’ Cheetah Chrome, where the ‘Unmedicated’ tracks were recorded.
2011 saw him reform THE PAGANS again, this time as a legacy band and toured Europe and America, with an offer of Japan arriving just before his passing.
Besides THE PAGANS, Hudson had a career as a journalist having worked as editor for the Cleveland Sun, crime reporter at the Corry Evening Journal, and literary critic at the Irish Echo. Further work appeared in Rolling Stone, Hustler, and the New York Post among others.
In 1998, a move to Niagara Falls marked what he would be most remembered for in journalistic terms. After scoring a reporting job at the Niagara Gazette, he was fired in 2000 for, allegedly, arriving drunk - which he disputed. So, in true DIY spirit, he created the Niagara Falls Reporter. He remained editor-in-chief through to 2012 when he sold his shares to move to Los Angeles.
His journalistic style was hard-hitting - the term muckraking has even been used. It was this hard-hitting style that resulted in him receiving a beating by three members of a local labour union.
He was also a noted author, having written six books including the biography of THE PAGANS, Diary Of A Punk.
In 2004, his son Ritchie died, leading to a further alcohol dependency.
In 2005, he was hospitalised and given last rites. He survived but after only a few months of sobriety, he returned to the bottle. 2007 saw him in hospital again, this time with liver failure - and was again given last rites.
In Los Angeles, he spent his time writing articles, books and songs and got heavily involved in a dog rescue programme.
In 2016, he made it back to Cleveland to do one final PAGANS show. On the afternoon of 26 October, and following intense abdominal pain, he was admitted to the emergency room of a local hospital. A physician reportedly told him he needed immediate surgery or death would ensue from sepsis, plus he appeared to have advanced colon cancer. Even if the operation were successful, he was told he might have only two months to live.
Mike declined surgery, saying he did not want to die on the operating table, and chose to return home. He was given pain medication; hospice was called, and within 24 hours he succumbed, surrounded by several friends and his two dogs.

At the time of Mike’s passing, I was on vacation in Australia. Being someone who tries to avoid all things computers while on holiday, the news of his death completely bypassed me. Since I interviewed him, we had remained in touch via Facebook conversations and he always forwarded me an autographed copy of his latest book. I now treasure the Diary Of A Punk book greatly.
I have to confess, I had not noticed a lack of correspondence with him since returning from Australia. Christmas appeared, then New Year, other stuff happened - you know, life in general. It was via a post from Stefan at Just4Fun Records that sent alarm bells to me. A brief follow-up message to him confirmed that Hudson had indeed passed away.
It still feels odd; a genuine Punk icon, who I was in contact with has now passed. Not really a surprise I concur, but my listening to tracks like ‘No Now No Way’, ‘Dead End America’, ‘Downtown Beirut’, ‘Wall Of Shame’, ‘I Juvenile’, ‘She’s A Cadaver’ and ‘Brian Always Said’ - tracks that have lived with me for many years (decades) - are now seen in a new light.
RIP Mike - you lived a life on the edge and I am forever grateful.