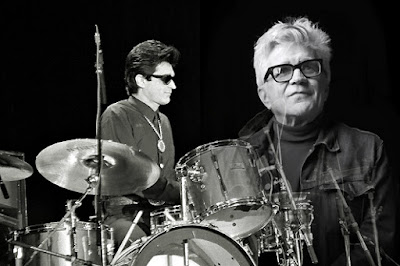 On Thursday 14 June 2018, Nick Knox - best known as the definitive drummer for THE CRAMPS - passed away. According to his sister, Jeanne Goldberg, the cause was cardiogenic shock. He was aged 65.
Knox, whose real name was Nicholas George Stephanoff, was born on 26 March 1958, the only son of Boris and Virginia Stephanoff.He first found notoriety in Cleveland proto-punks, THE ELECTRIC EELS when he joined the band as drummer in 1975. Although this line-up with Knox recorded a series of demos, which included the posthumous 1978 released single ‘Agitated’ on Rough Trade, it was to prove short-lived as they performed just the one gig before splitting up.

In 1977, he joined THE CRAMPS, replacing original drummer Miriam Linna. His tenure with the legendary Rockabilly/ Garage/ Punk band would last through to 1991 and saw him perform on many of the band’s most popular records including the four studio albums: 1980’s Alex Chilton-produced ‘Songs the Lord Taught Us’, 1981’s ‘Psychedelic Jungle’, 1986’s ‘A Date With Elvis’ and 1990’s ‘Stay Sick!’ - along with 1987's live 'Rockin n Reelin In Auckland, New Zealand'.
His stoic demeanour, quiffed jet black hair and shades added to the cool appearance the band had already created. He can be seen drumming with the band in the 1980 film, URGH!, A Music War, cranking out ‘Tear It Up’, which culminates with a flying cymbal and again on the infamous ‘Live At Napa State Mental Hospital’ performance recorded in 1978.
On leaving the band, Knox largely retreated from the music world, returning to Garfield Heights, Ohio. In 2003, he made his last live appearance, this time with Cleveland legends THE PAGANS. Although he did occasionally do some Djing, his next notable music venture was working with CLEVELAND STEAMERS, playing drums on three tracks from the band’s 2013 debut album and being credited as ‘Senior Advisor’ on the band’s recently released ‘Best Record Ever’ album. He filled the ‘Senior Advisor’ role for ARCHIE AND THE BUNKERS also, who lovingly referred to him as ‘Grandpa Nick’.
Linna wrote the following in a Facebook post: "I last saw Nicky – Nick Knox – who most you know as the drummer of note for 70s bands the Electric Eels and The Cramps, last weekend, in intensive care at the Cleveland Clinic. It was heartbreaking, as I had spent a few great days with him at the end of April."
A service was held on Wednesday 20 June at 11:00 AM. Interment was at St. Theodosius Cemetery, Cleveland Ohio.
Knox is survived, in addition to his sister, by nephews, a niece and cousins.