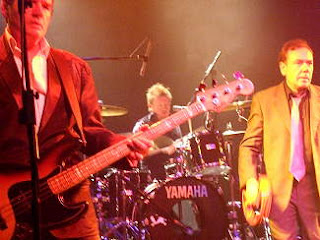 THE GODFATHERS - LOWDOWNS, Arts Centre, Colchester, UK - 9th May 2010
It could so easily have been a catastrophically wrong trip down memory lane. For starters it’s Sunday night and a bloody cold one at that. Twelve quid a head seemed a bit steep also for a band that, much as I rate it, has only ever remained a cult name. The sparsely populated Arts Centre suggested Colchester thought much the same also.
The LOWDOWNS was a quartet that looked a bit like your typical Brit Pop thing but with more balls and a bass sound that, at times, boarded the bowel-moving depth charge tones of one Mike Watt. I vaguely remember a fast rocker of a track called ‘Switch’ and the singer looked something like a cross between Rodney from Only Fools And Horses and the singer-dude outta Oasis. To his, and the band’s credit, they did put on a show to the assorted, mainly disinterested, punters; pulling several of the recognised ‘rock moves’ albeit with a degree of inhibition.
The between band choice of tunes was exceptional - dunno if it was the request of THE GODFATHERS or just good taste on the behalf of the PA man, but we got MC5, NEW YORK DOLLS, ELECTRIC PRUNES and some bizarre instrumental-but-blazing version of THE WHO’s ‘I Can See For Miles’. The good tunes sure accompanied the Guinness well. So well in fact, I managed to bang two cans back! Good work!! 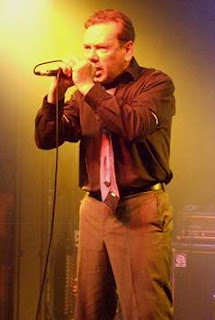 The familiar strains of a surf-guitar-led take on ‘Goldfinger’ rattled out of the speakers; I felt a sense of expectancy in the air - even if it was only to see whether brothers Coyne would now be fat old men playing spiritless versions of once-biting songs.
As it happened, both vocalist Peter and his bassist brother Chris, looked anything but fat. Sure, they have aged a bit but considering this tour celebrates the band’s 25th Anniversary that can only be expected. What has not changed is the menace of old. Peter Coyne still glares at the crowd from his position on stage with a look that fuses defiance with self-confidence, while the remaining band members fail to share a single smile throughout. For those who don’t know the band, this could suggest apathy or it could provoke a sense of intimidation. I know it’s not the former, and I am sure the Coyne brothers would be happy with the latter!
‘I Want Everything’ opened the set, followed by, if I recall, ‘She Gives Me Love’. Whether it was the sparse crowd or the frosty May evening, but the band didn’t find its stride instantly. ‘She Gives Me Love’ in particular sounded a little lacklustre. Having always employed a twin-guitar attack, this reformed single-guitar version of the band seemed to lack the sonic depth of old.
Five songs into the set a fiery new song was played and the band seemed to move up a gear. The inclusion of a couple of old SID PRESLEY EXPERIENCE tracks (with which the Coyne brothers played before the GODFATHERS) in the shape of ‘Public Enemy #1’ and the classic ‘Hup Two Three Four’ (which I recall SPE doing live on the The Tube back in the early 80s!) was an unexpected highlight. That said, Del Bartle, the former SPE guitarist replaced original GODFATHERS guitarist Kris Dollimore in 2009, so not strictly unexpected.
Peter Coyne’s barbed antagonism was evident a few times, in particular pointing out a guy in the audience who hadn’t bought any beers for his mates. “I’ll have a whisky and coke when you do - and make it a double,” sneered Coyne. Did the job though - Coyne got his drink!
Other highlights of the main set included ‘This Is War’, the debut ‘Lonely Man’ single (the band is currently pushing a very nice double CD reissue of the formative retrospective ‘Hit By Hit’) and an excellent new track called ‘Back Into The Future’. By the time of the set’s climax - a stunning blitz through ‘How Low Is Low’, ‘This Damn Nation’ and the threatening, imperious declaration that was ‘Cause I Said So’ - the band was firing with a force that any American Mafioso could only dream of.
It appeared there was going to be no encore as Chris Coyne turned off his bass amp and seemed to show a sense of disgust toward his brother. Not sure what he expected from a Colchester crowd on a Sunday night who had paid £12 a head. Thankfully Peter coerced him back for a finale of ‘Birth School Work Death’ and a psychedelic burn through Lennon’s ‘Cold Turkey’. I would’ve rather heard another original (‘Unreal World’ or ‘Those Days Are Over’ would’ve been great), but at least we got those in light of Chris’ huffy protest. 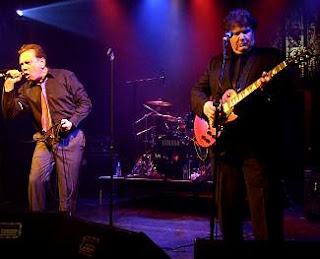 I did smile to myself during ‘Birth School Work Death’. At the time of the gig, Britain wallowed in a state of no officially-elected Prime Minister. It seemed slightly ironic to me that, throughout THE GODFATERS’ original existence, there was a back drop of oppressive Tory rule - be it Thatcher’s dictatorship or the grey John Major. Twenty-five years on, the band is back and so is the Conservative Party. How’s the song go? “I’ve been abused and I’ve been confused, and I’ve kissed Margaret Thatcher’s shoes.” We’ve now got Clegg kissing Cameron’s arse!
Welcome back Brothers Coyne - Britain may just need your brand of Punk infused Rock ‘n’ Roll once again!
Posted by Scanner Zine at 7:19 AM