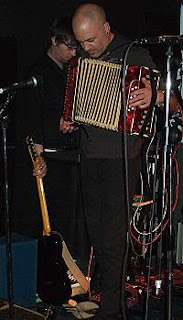 THESE ARE END TIMES - DANIEL MERRILL - LIFE AND TIMES OF, Blue Room, McGinty’s, Ipswich, UK - 14th May 2010
Since I have been in New Zealand, McGinty’s seems to have become one of the most popular live music venues in Ipswich. It’s easy to see why too; separate room from the bar, a central Ipswich location, good booze served in the bar and, on evidence of this, excellent acoustics too. This was a show to celebrate the launch of the debut album from newish local band, THESE ARE END TIMES, which has been released on the band’s own Antigen Records. But before the main event...
...I had to sit (well, stand) through the Indie, wannabe-RIDE convulsions of LIFE AND TIMES OF. I’m sure the band is very good at what it does but, in a bid to escape its droning Indie tones, all it inspired me to do was head into the beer garden to breathe in second hand cigarette smoke. Maximum rock ’n’ roll?? Not even partial!
After some wonderful Guinness refreshment, I went back to the Blue Room to witness DANIEL MERRILL. Now, this was interesting. MERRILL plays violin to a pre-recorded (and, at times, bombastic) backing track. It was well thought out stuff with MERRILL adding a visual side to the performance that went beyond ‘a bloke with a fiddle’ also. For 15 or 20 minutes, it was quite a captivating and even hypnotic performance. By minute 21 though, my attention began to wander; my glass had run dry also. He seemed to play for some time, and received a deservedly good response, but there wasn’t quite enough to hold me present.
And so, running nearly 30 minutes late, came THESE ARE END TIMES. The band is a veritable who’s who of the netherworld of Ipswich’s music scene. The band has been put together by guitarist/ vocalist Martyn Peck (aka Roki) who has had stints in notables such as OPTIMUM WOUND PROFILE, RAW NOISE, SCREAMING HOLOCAUST and most recently THE BALLISTICS. Joining Roki is Simon Finbow, also on guitar/ vocals who fronted CHOCOLATE and was also in OWP; bassist Andrew Laws (better known as Andrew Culture) of JUNK CULTURE, ZEEB and Beat Motel zine fame; drummer Dom Cattermole (ex-NEMO and ZEEB); Gareth Patch is responsible for keyboards, samples, digital noise and vocals (ex-LOVE LIES BLEEDING and DELIRIOUS) and finally, centre stage is Mark Schorah blowing his trumpet (ex-BALLISTICS). 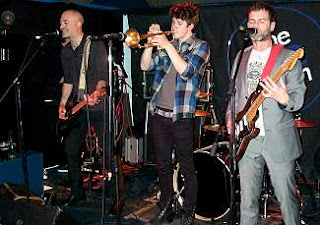 Knowing Roki’s eclectic taste in tunes, I had little idea what to expect from this self-proclaimed ‘Post Rock’ band. What I actually got was a very clever, decidedly interesting and occasionally disconcerting 50 minute slab of sound. Comparisons are not obvious but ‘White Light From The Mouth Of Infinity’-era SWANS certainly came to mind, mixed with some of the orchestral punches of CARDIACS on downers (and most definitely not said band’s quirky side). Vocals penetrated the sound sparsely, which was a shame when you consider Simon numbers in the band’s line-up. ‘End Times (We Are All Condemned)’ probably proved to be the most accessible song of the set, although the unexpected highlight was the 15 minute ‘There Should Be A Crowd Of Spectators At My Execution’, which spliced samples from a film about people jumping off San Fran’s Golden Gate Bridge with an ominous, reverberating background panorama accentuated by punishing slices of scorching sonic attack. While the closing ‘Now I Realise How Helpless We Are’ (you get the impression these songs are of a slightly, um, downbeat, depressing nature?) continued the unique atmospheric drama of the set with Roki playing an accordian, it did end the set on a vaguely disconnected, ambiguous note.
By 11.30 it was all over. ...ENDS TIMES had impressed me greatly; my ears were suitably fried; the Guinness was as Guinness is: sublime!
Posted by Scanner Zine at 6:40 AM