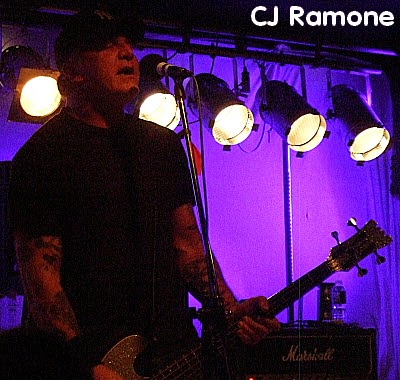 CJ RAMONE - PCP EAGLES - FIRESHARK - King’s Arms, Auckland, New Zealand - 7 February 2015Well, I thought my days of seeing a bona fide RAMONE live in concert were well and truly over. Sure, you could argue there are only three left to see - Marky and Richie (drummers) and CJ himself. What sets CJ apart though, is the fact that neither Marky nor Richie have released an album as cracking as CJ’s recent ‘Last Chance To Dance’. In fact, given Dee Dee’s patchy solo releases, it could even be argued that CJ’s latest could rival Joey’s work as the best post-RAMONES release yet. That made the promise of this gig, organised by New Zealand’s very own saviours of quality live entertainment, Punk Rock Road Trips, even more tempting. The fact that CJ’s band included the guitarists from the legendary ADOLESCENTS made the gig quite essential. 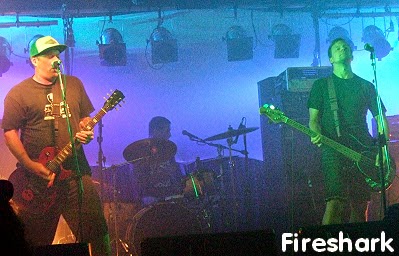 Auckland’s FIRESHARK kicked proceedings off. Never heard the band before but the trio played solid, hard-hitting Punk Rock. The band released an EP a few years ago and, more often than not, I kept hearing a nod to an old Dr. Strange band, WHATEVER... The sound was similar in the sense it was fast but not thrashy, snotty but not growled, and catchy but not pop. Drummer really impressed I have to say while the guitarist had a pretty deft array of riffs up his sleeve. One to watch!
Auckland’s finest (if not New Zealand’s at present), PCP EAGLES followed. After seeing a trio that were anchored to the spot by due to vocal duties, witnessing this five-piece with the incredibly mobile Joe on vocals was akin to a volatile blur of riff-laden, raging ferocity. 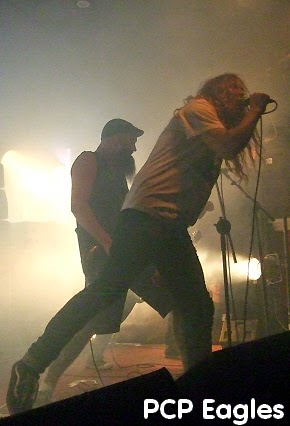 This was a much more impressive show than the last time I saw the band (which was pretty smoking too), supporting MDC. The sounds were more intense, the velocity of the songs was faster, the presence of the band was more confrontational and generally, this was just a whole shit-load more damage-inducing. Amidst the familiar tracks off the EP, there were some new tunes and less RAMONES riffs circulating. Joe spent a good portion of the gig in the crowd, stirring things up and getting a bit of movement going leaving the band to blaze on the stage. Killer stuff that left its mark on senses other than just the ears!
And so to CJ. Have to say, following PCP, he and his band looked decidedly pedestrian for a few brief. minutes. Then the tune kicked in, ‘Understand Me’ from his new album, along with its hopelessly addictive melody. Then you notice Steve Soto, the legend behind AGENT ORANGE and ADOLESCENTS. Then you have the other guitarist, Dan Root, who is Steve’s guitar-slinging partner in ADOLESCENTS. Then CJ launches into ‘Judy Is A Punk’. 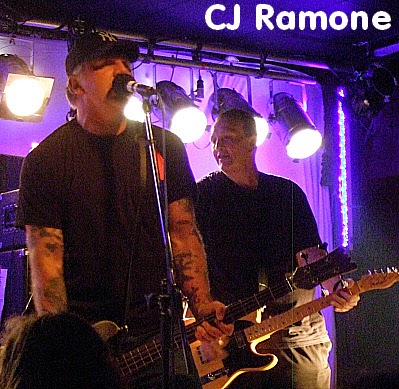 It’s without a doubt that most in attendance were there to hear RAMONES songs; not surprising since the band’s only visit to NZ was back in 1980. It was a relatively predictable selection - ‘Blitzgrieg..’, ‘Rockaway..’ (which was cracking incidentally), ‘Sheena..’, ‘...Sedated’. Oddly, the only song played from CJ’s actual tenure in the band was ‘Strength To Endure’; I thought we may get ‘Scattergun’ as he wrote it. There were a few surprises - ‘She’s The One’ has always been a favourite RAMONES tune and one I had seen the band play rarely, stellar takes on ‘I Wanna Be Your Boyfriend’ and ‘The KKK Took My Baby Away’ and, most surprisingly and certainly very welcome, ‘Baby, I Love You’.
CJ’s own stuff seemed merely tolerated due to the majority of the crowd's desire for RAMONE-o-core though. A shame too, as the new album is a stunner - ‘Pitstop’ was a real highlight as was ‘Three Angels’ from the ‘Reconquista’ album, that was dedicated to Joey, Dee Dee and Johnny. The whole gig finished with a take on MOTORHEAD’s ‘R.A.M.O.N.E.S’ which, while fun, didn’t really compensate for the lack of ‘Now I Wanna Sniff Some Glue’, ‘Pinhead’ or the aforementioned ‘Scattergun’.
Performance wise, it surely wasn’t the perfectly primed machine that THE RAMONES were. The band was tight and convincing but much more laid back (not a bad thing) than THE RAMONES. There was no synchronised sprints to the front of the stage (not that the stage was really big enough anyway), just maximum rock ‘n’ roll from some veterans who are virtually beyond compare. There were a few calls for ADOLESCENTS songs too; I noticed Steve Soto even teased with the opening notes of ‘Kids From The Black Hole’. CJ himself was conversational, relaxed and did a fair take on Joey without trying to actually mimic him.
Without a doubt, this was a life-affirming gig; affirmation of the power of music and of Punk in particular. Hearing a certified RAMONE perform those songs live in the manner CJ did, completely confirmed my belief that those songs are magical and as much a significant part of rock ‘n’ roll’s history as anything The Beatles ever released. I’ve listened to many of those songs for over 30 years now. I saw THE RAMONES a number of times and I’m pleased to say that CJ and his band lived up to the standard set and did those songs with class, distinction and respect. AND... They also made it a shit-load of fun!! Gabba gabba...
Posted by Scanner Zine at 7:33 PM